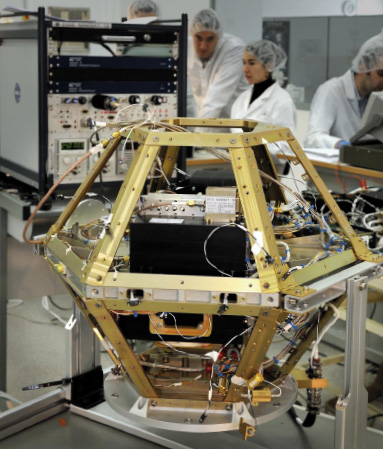 Nanosat 1B, during tests in INTA facilities

Industry: Space.
Partners: INTA (Spain).
Description: the Nanosat-1B Spanish satellite, designed, developed and operated by the Instituto Nacional de Técnica Aeroespacial (National Institute of Aerospace Technology), INTA, is a nano-satellite which weighs 22 kg. Its main mission is the communication between remote sites like the Antarctic, the Hespérides ship and Spain. The Nanosat-1B has fourteen sides, all of them covered by solar panels but the bottom one where the following antennas are installed: a medium gain UHF four wire antenna and two patch antennas. On the top side there are four UHF monopoles. The solar sensors and the Vectorsol experiment are located in the middle tray, being all the other equipment and experiments located inside the satellite. The vectorsol experiment was composed by several SSOC sun sensors from Solar MEMS team. It was succesfully tested and operated in orbit.

view all projects
This website (www.solar-mems.com) uses own cookies to gather information that helps optimizing user’s visit to the web pages. Cookies will be not used to compile personal data. The user will allow or reject their use, and its configuration could be changed whenever desired. I agreeRead more